Since 1995, it has worked for the protection of agricultural biodiversity, by collecting, cultivating and disseminating seeds of traditional varieties, as well as by raising awareness in Greece and beyond.

The movement was founded by Panagiotis Saitanoudis, and now gathers a wide community of supporters: almost 30 thousand followers on the Peliti Facebook group, to give an example.

Sharing and cooperation between all living beings are the fundamentals of Peliti’s philosophy; which focuses on creating common sense and solidarity within its community, through the rediscovery ok knowledge related to local biodiversity and the non-profit dissemination of plant genetic resources.

Since its creation, Peliti has been organizing expeditions in Greece to collect seeds from traditional and local varieties, trying to make them widely known and used all over Greece, to protect local biodiversity and enhance food sovereignty. It has supplied more than 200,000 people with seeds and plants so far.

Peliti's action targets amateurs but also professional users, allowing them to get free samples of non-genetically modified varieties of seeds from local varieties, to test on their lands.

And as we know, targeting professional farmers and seed producers, is the keypoint for regaining national and sustainable food sovereignty.

The other important dimension of Peliti’s action is to raise awareness within civil society and to promote international cooperation and legal action to protect and regenerate agricultural biodiversity.

The Peliti community includes local groups in various parts of Greece that support and/or promote specific actions such as artistic events or legislative work. It also has volunteer teams working for its purposes all around the world: in Bulgaria since 2014, in Guatemala since 2016, in Idaho, USA, since 2019.

In 1999, it created the “Peliti Seed Festival”, experimenting its philosophy of sharing local plant genetic resources to as many people as possible and without money being involved. The Peliti festival is free of charge; participants even benefit from free local farmers' food products.

In  2013 and 2015 the Peliti festival was honored with Dr Vandana Shiva’s lectures and participation.

In 2017, the “Olympic Seed festival” was created in addition, to advocate for the end of war against nature, following the traditional Olympic games’ symbol of truce, peace and cooperation in Ancient Greece.

After having been moved around for years in various parts of Greece, the Peliti's seed collection is now stored in Peliti's land, in Mesochori Paranesti, Drama Prefecture of Greece. A special building is currently under construction for hosting the seed bank.

Peliti's collection is made of about 4,000 samples of seeds from Greece and abroad. It should be renewed in 2020. Panagiotis Sainatoudis, founder of the Peliti community, is responsible for the collection of seeds.

The varieties detained by the community are not certified organic by any Greek certification body. Some of them have been donated by professional organic growers though and are suitable for organic agriculture. 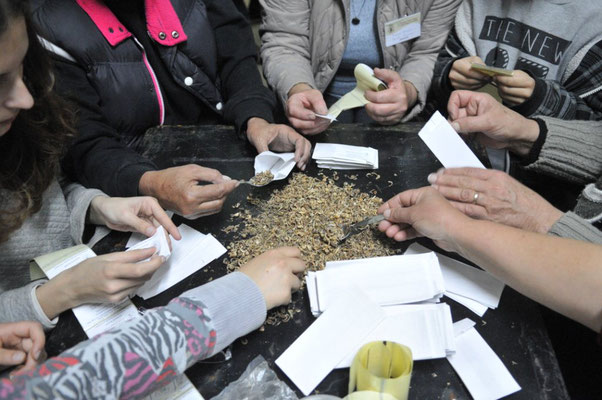 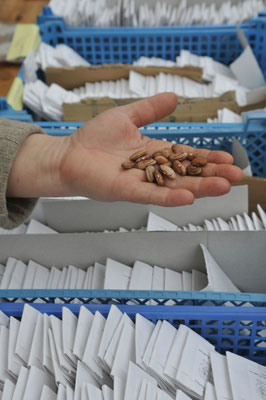 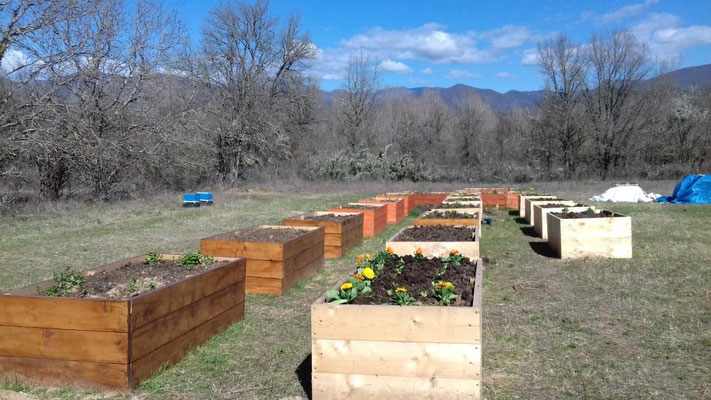 Users can order seeds by contacting the organization, through email or website, from October to January only. Orders are sent by post office so beneficiaries have to first send Peliti a stamped envelope worth 2€. If the seeds they chose are not available at the moment Peliti replies to the order, they would be replaced with close traditional varieties.

Peliti annually replies to 3,000 letters and distributes around 12,000 packets of seeds, in Greece, Europe and the world.

Peliti's festivals are another way to get seeds from the community and meet cultivators.

At Peliti's headquarters, in Mesochori Paranesti, on Saturday after Orthodox Easter.

At the Holy Monastery of St John the Divin, on first Saturday of September.

PELITI has a very large network of volunteers throughout Greece. They don't pay membership fees and most of them don't support the organization with financial donations but by offering their time, skills and knowledge.

A volunteer can offer his/her work once a year, for example during the Peliti Seed Festival, or can participate in volunteer groups on a regular basis throughout the year, helping with:

- Responding to mails and letters;

- Helping with punctual specific work such as translating or carpenting,

Whatever skills you have, you can be part of the community and participate to make its action possible.

Peliti also has financial supporters, who make donations between 20 and 100 euros per year.

About money needs & use

Alternative Community Peliti started with no money and learned to work with very few financial resources. Its functioning is based on the reduction of needs, self-sufficiency and the philosophy of sharing.

From the very beginning, Peliti had no property, but only people who supported it. For the first Peliti Seed Celebration, in 1999, the concept was simply to gather and share everything: time, knowledge, skills, seeds, food. The logic remains the same even today, except the community gathers enough people to be able to collect two tons of food now during its festivals.

Until 2012, Peliti’s main financial ressources came from the sale of printed material it produced, such as booklets gathering information on people cultivating local varieties in its area. After the financial crisis, that resources gradually phased out. Peliti still sells t-shirts, bags, and books but the turnover is very small.

The organization receives some donations from members as well as support from Greece and abroad (Switzerland, France, Germany, the Netherlands, Bulgaria, USA, Egypt etc.). These donations help with the development of the structure: purchasing and managing Peliti's land, constructing the Seed Bank, launching the Olympic Seed Festival, etc. Funds also are needed to pay the staff and Peliti is always searching for steady funding, to be able to operate more efficiently.