Som fir Erhalen an d’Entwécklung vun der Diversitéit (Seeds for the Enhancement and Evolution of Diversity), is a non-profit organisation defending agrobiodiversity by collecting, preserving and disseminating local seed varieties.

It was first launched in 2012 as an informal network of different initiatives, associations and institutions, before becoming a non-profit organisation on April 29, 2013. Among the founding members were Ste Schwartz, Katy Fox, Georges Moes, Thierry Helminger, Frank Adams and Stephanie Klaedtke.

At the present moment, the organisation has no employees, and the work is financed through seed marketing, together with material and financial support from public sources.

SEED Luxembourg is a member of the European Coordination Let's Liberate Diversity!.

SEED is an independent platform of different actors from various backgrounds in Luxembourg, which aims at promoting and supporting initiatives in favour of the local diversity of cultivated and wild plants with a focus on plants serving human alimentation.

SEED's first ambition is not to become a seed producing organisation but to create participatory structures of cooperation by involving actors of all backgrounds and specialities, with the objective of making seeds, as the starting point of food production, an issue that receives attention at the centre of society.

SEED aims at promoting local and locally adapted cultivars in order to preserve and enhance agricultural and horticultural biodiversity. It takes care of evolutionary selection and multiplication of seeds and plants, as well as their distribution to amateur gardeners and local producers. It also gets to promote the marketing of local seeds on local markets.

SEED is involved in political work in order to improve the legal situation of traditional varieties that are not registered in official lists and catalogues, to raise the level of public awareness and recognition of an ecosystemic approach towards genetic diversity of alimentary plants and to enhance the economic value of local seeds for local markets.

SEED organises public seminars, conferences and workshops in order to preserve and share artisanal skills relating to seeds and plant multiplication; to motivate amateur and professional producers to multiply and use local varieties of seeds; and to raise awareness about the indispensable service provided by local seed diversity to sustainable food sovereignty and security.

SEED cooperates with initiatives, organisations and institutions following the same or related purposes by adopting respectful and balanced ways of communication, allowing controversial approaches to generate opportunities for innovative development as well as fostering synergies and political clout.

SEED is involved in practical work on local cultivars and locally adapted varieties of fruit, vegetables and cereals.

Local fruit cultivars and varieties are multiplied and marketed to private and public customers. National orchards are restored and preserved. Courses in tree grafting and pruning are organised.

More or less 80 varieties of approximately 30 vegetable species are regularly multiplied for cultivation and distribution. Seeds are distributed in public venues (libraries, cultural centers) and on the occasion of public events. People can make voluntary donations for the seeds. There is no service for ordering seeds online due to a lack of manpower.

Distribution of vegetable seeds to professional market gardeners started in 2020 and is being developed further in 2021 in accordance with the framework provided by the new EU Regulation on organic production and labelling of organic products (EU/2018/848).

Traditional wheat varieties are cultivated, developed, multiplied and used for artisanal sourdough bread making in a circular seed-to-seed approach for a local markets. The project aims at promoting artisanal ways of food production by involving local farmers and citizens in cooperative structures.

(Available in Dutch and French.) 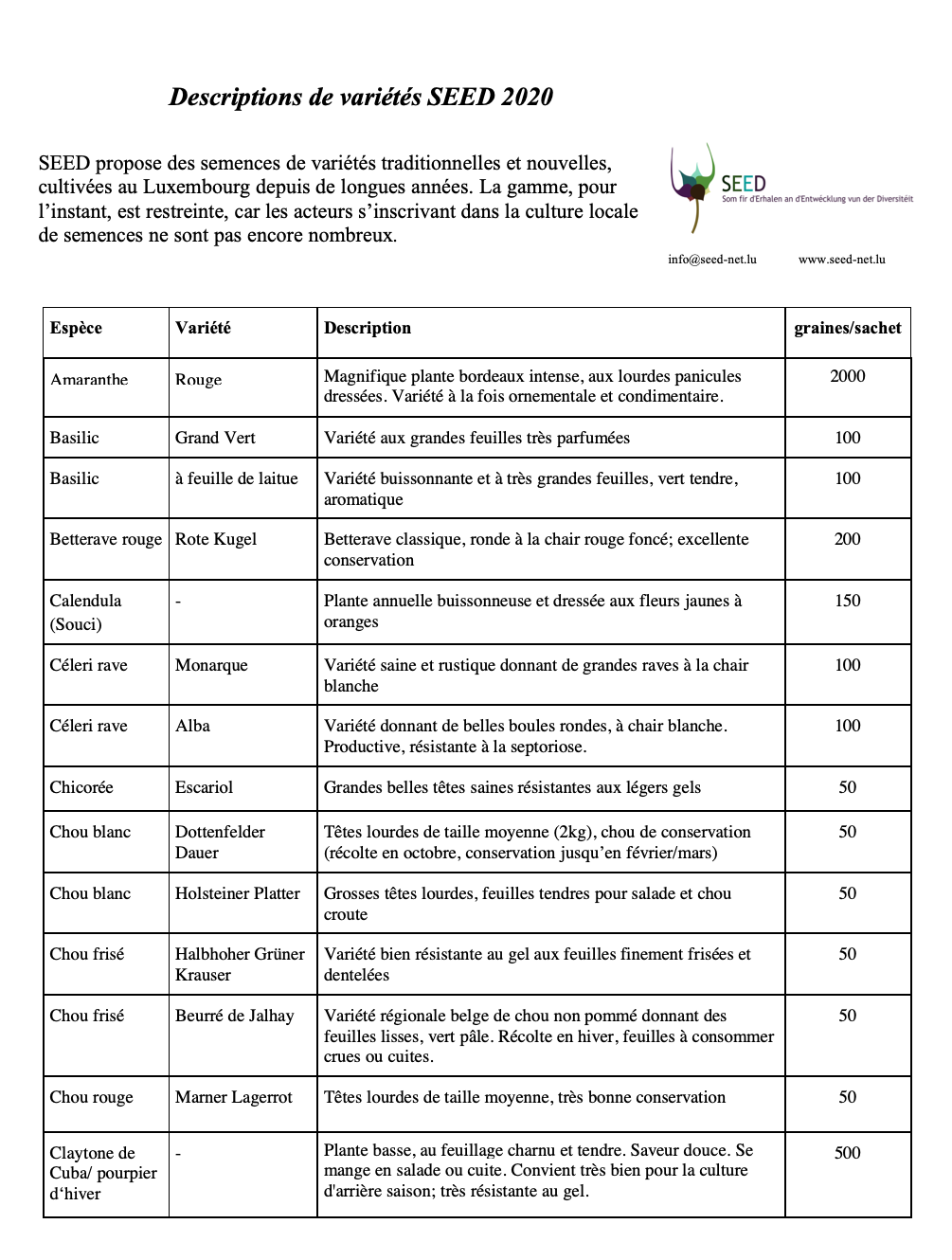 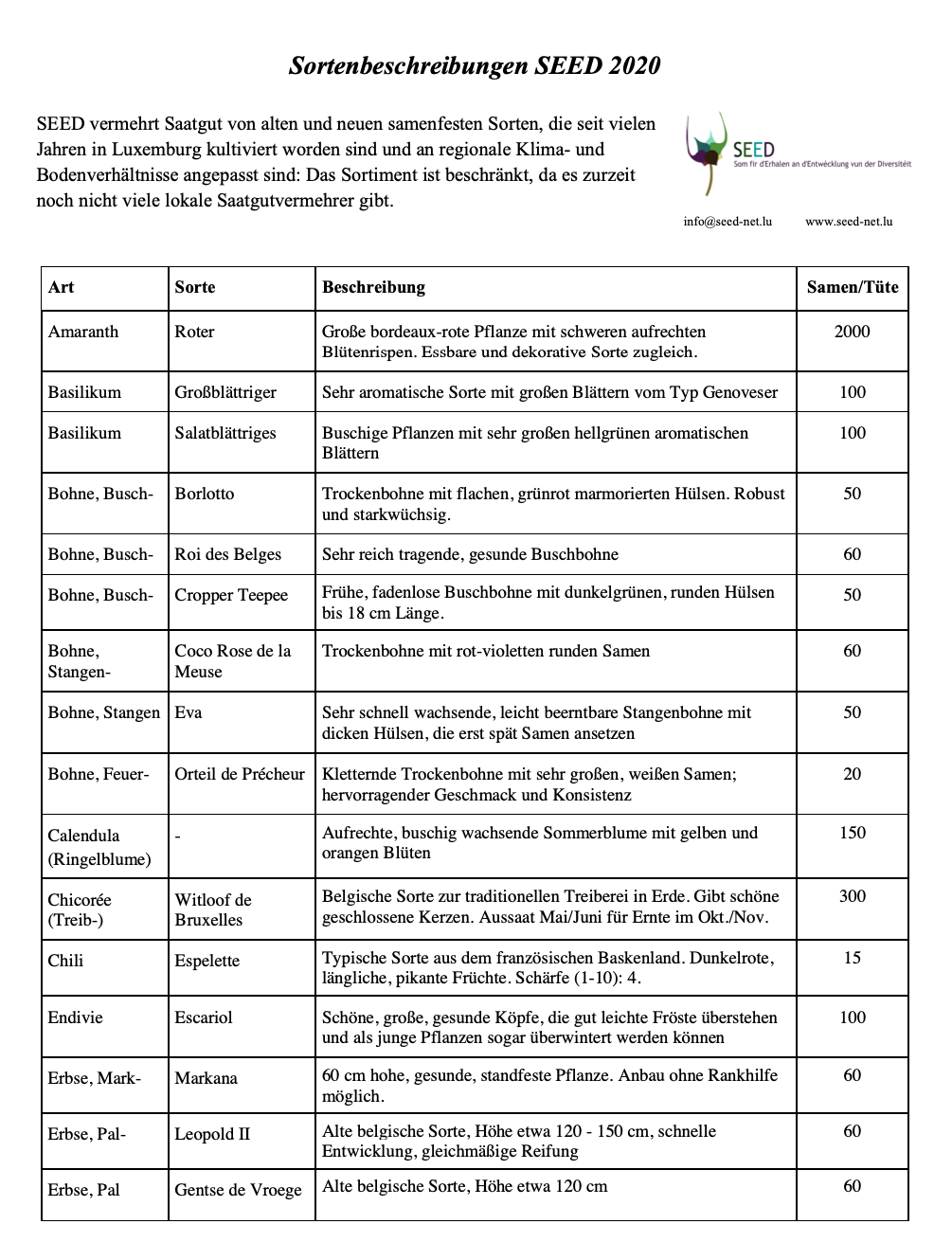 - Creation of a collaborative network of vegetable seed-growers, producers of seedlings and market gardeners for a value chain of local, circular seed-to-seed food systems ;

- Creation of a self-organised citizens seed network in the context of Luxembourg’s community gardens ;

- A national strategy and action plan for cultivated biodiversity ;

- Public recognition and support to enable coordination of activities through permanent employees ;

Seeds can be ordered by sending an email to the organisation at : info@seed-net.lu. No order can be made via Facebook.

Seed distribution is made in public spaces (CITIM, MESA, Mierscher Lieshaus). The association must be contacted for more information.

The range and available quantities of products offered by the association are limited, as SEED's partners, producers and multipliers that are part of a local and circular approach to seed production, are not yet numerous.

The portions are adapted to the needs of a private garden. The packets contain between 12/15 and 2000 seeds and are distributed in exchange for a voluntary donation to support the work of the association.

Individual membership fee is 15.- €. People become members through their wish to support the work of SEED. SEED is not able to grant special services for members as its human resources are wholly absorbed in professional work.

Organisations normally do not become members of SEED but instead cooperate in specific projects. In such projects, SEED serves as a platform and a counsellor.